The NYT’s block of editorial blockheads have had quite a week for themselves. First Tom Friedman embarrasses himself by writing about economics as if he knew what the word meant, and now David Brooks notices the country isn’t in very good shape after years of the austerity and corporate theft he’s been championing as solutions without actually realizing that’s what he’s doing. Pretty good trick for a normal person but a necessary skill for right-wingers. Without it their heads would explode collectively. END_OF_DOCUMENT_TOKEN_TO_BE_REPLACED 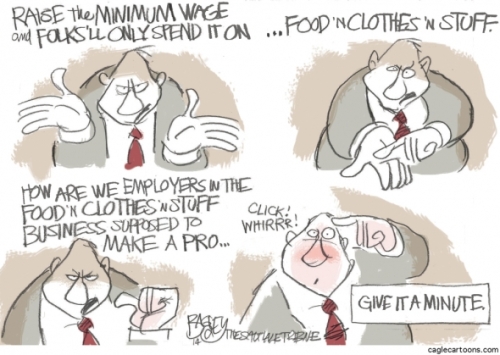 O What a Funny World

1) Thomas Friedman isn’t just an idiot, he’s ignorant too. But then he’s an ideologue and ideologues are professional morons.

2) The 1% can justify every single policy in their (financial) favor…but only if they lie their asses off.

3) Jeff Bezos has just made Amazon a CIA asset and himself The Bagman. In retrospect, it was predictable if not inevitable.

4)Exxon CEO and Frackmeister extraordinaire Rex Tillerson is a strong advocate, even a champion of fracking technology but only until it’s his backyard getting fracked. Then, not so much.

Rex Tillerson has joined a lawsuit to stop construction of a water tower near his $1.3 million estate on Dove Creek Road. That water would be used in fracking, a process to drill oil and gas.

Tillerson even appeared at a Bartonville Town Council meeting to speak against it.

The lawsuit claims the project would create a noise nuisance and traffic hazards.

5) Budget hawks Alan Simpson and Erskine Bowles – two of Pete Petersen’s most reliable anti-SocSec thugs, set up an anti-deficit group. In the Irony of Ironies category, this group is now, um, broke. (scroll down)