Change Raptors to Banksters and It Works Even Better

How Healthcare Works Now So Why Fix It?

Cartoonists and sane people have long noted the cognitive dissonance here but I found it refreshing to see it in their own words. And their own handwriting. 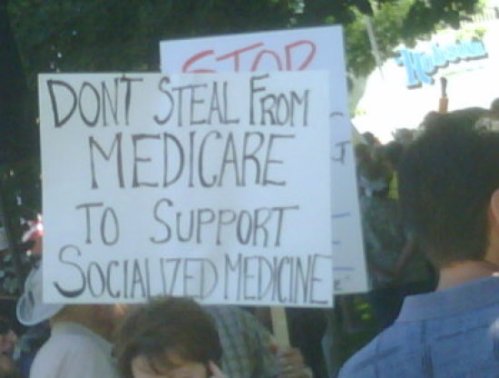 The Beat(ing Up) Goes On

David Horsey’s on a roll this week. (Related to this post.)

Today Is Yesterday Only With Cell Phones 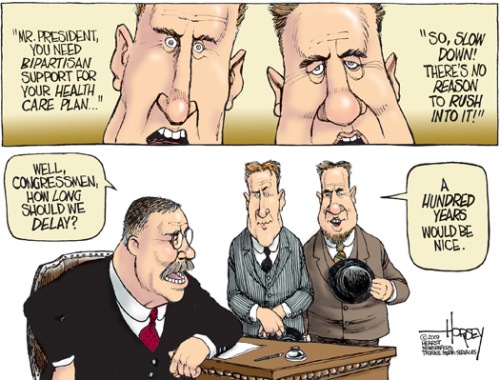 The arrogance and desperation of the conservative Democrat leadership has reached such an advanced stage that that leadership is openly disavowing its own members. Yesterday the slavish NYT ran a neat little article about how Obama’s willingness to dump the public option, thereby dumping as well the majority in his own party that want it and the large contingent of liberals and progressives who have said they won’t vote for a healthcare bill that doesn’t have it, thereby splitting the party in two, is actually called “uniting the party”.

President Obama’s speech on health care failed to bridge the gulf with Republicans, but Democrats said on Thursday that the president had largely succeeded in unifying his own party by making a cogent, persuasive pitch to the American public and by casting his plan to overhaul the health care system as a political and moral imperative.

The day after the nationally televised address, in which Mr. Obama signaled that he could accept an alternative to a government-run insurance plan, influential Democrats who previously seemed wedded to the public insurance option hinted that they, too, might be flexible. They included the House speaker, Nancy Pelosi, and Representative Henry A. Waxman, the chairman of the House Energy and Commerce Committee, both from California, and who both, like Mr. Obama, say they still prefer the public option, and view it as crucial to passing a bill in the House.

Pelosi has been amenable for a long time, whatever she said publicly, but Waxman’s willingness to be “flexible” is a big disappointment. It may be that he has just gotten the message Reid/Pelosi have been sending for months: “Fuck the lib/progs and fuck what the country needs & what the voters want. We’re not going to piss off our conservative corporate contributors, especially insurance companies, by passing a bill they don’t want. Period.”

END_OF_DOCUMENT_TOKEN_TO_BE_REPLACED

The Crippled Lobbyist & His Puppets

Wiley again, of course, with the story of a sad, sad case.

But lobbyists don’t work alone. They have to have somebody to work on. Zippy meets some of those targets and reacts as you might expect.