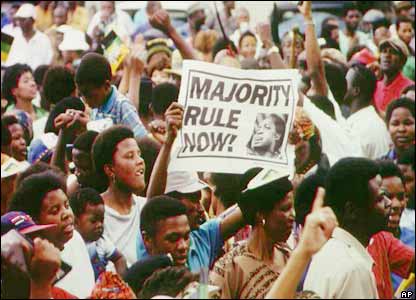 Back in the bad old days of apartheid in South Africa, the pitch against the policy was less often racism than the scandal of a tiny minority ruling a big majority. It seemed – and was called – a travesty of democracy, the antithesis of representative government, a sort of racist tyranny/slash/oligarchy. The core of democratic governing was embodied in the concept that the majority rules. If it doesn’t, explained John Locke in Of Civil Government, you’ve got chaos.

For over 200 years the United States and every other country with a democratic constitution considered this rule unbreakable. Abraham Lincoln fought the only internal war we’ve ever had to prevent a minority of Southern slaveowners from dictating policy to the majority government at the point of a bayonet. Political parties from the Federalists to the Whigs to the Know-Nothings to today’s GOP, Democrat, and Green parties understood the rules: when a majority of the country has decided on a course, the minority has to change their minds to get its way. In a democracy, minorities may influence policy but they don’t make it.

No one, to my knowledge, ever questioned this fundamental truth. Until the Bush Cult.