Cokie Roberts and Her Slide Right 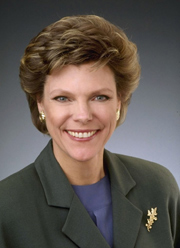 ever has. She seems to have abandoned her usual sugar-coating of faux-objectivity altogether.

I just heard Cokie Roberts, serious journamalist [sic], tell me that the Dems have to be careful:

Clever girl, our Cokie. She hit the GOP trifecta: She helpfully raised the Republican talking point of the “ineffectual Democratic Congress,” she tied the efficacy of Congress to ending BushCo’s Quagmire in Iraq without mentioning the Republican Quagmire in the Senate and then helpfully set up an impossible frame for the Democrats: They have to fix everything that BushCo has destroyed in the last six years except that they can’t do it on their own or appear rude while doing so. They have to get legislation passed by working politely with an obstructionist opposition party that was perfectly happy being a universal rubber stamp for Dear Leader and NOT PASSING A BUDGET THE LAST YEAR THEY WERE IN POWER. They have to end a war of aggression without hurting the feelings of the maniac who started it. They have to balance, weave, dodge and frolic and when they do, it still won’t be enough to win accurate coverage in the corporate media.

You almost have to be my age to remember when Roberts was a reasonably legitimate reporter and a fair if not exactly perceptive political analyst. Back in the day, Roberts was a young (30-ish) correspondent for a public broadcasting service that found its legs during Watergate and was building – or attempting to build – a reputation for journalistic excellence. She fit right in. She had unparalleled political connections, being long-time Louisiana Rep Hale Boggs’ daughter, and she used them with intelligence and wit.

But those days are long gone, and it might be instructive to examine how the slow, inexorable decay from a bright reporter to a conservative corporate mouthpiece came about.

END_OF_DOCUMENT_TOKEN_TO_BE_REPLACED

Posted in CPB, Media, Why the News Media Sucks