The Coke Museum: A Corporation Worships…Itself

The corporatization of American culture has just taken another step toward total immersion. 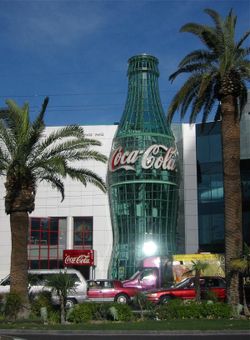 Tomorrow, Coca-Cola is opening what I think is our first corporate “museum”. Called, modestly enough, The World of Coca-Cola, it mimics a real museum in every respect with exhibits, Coke-related art, historic “artifacts” (their word), and dioramas. There’s even a movie theater where you can watch old Coke commercials, no doubt while a stentorian voice in the background drones on about the cultural significance of Coke ads. Other companies have built paeans to themselves stocked with “memorabilia” but Coke is the first one I know of to dedicate an entire building to itself and call it a “museum”. It replaces the old WoCC near Atlanta’s underground, a much smaller place that never had museumistical pretensions.

Not content with slapping their names all over everything in sight in exchange for cash, our corporatocracy is now attaching to itself the same mantle of historic and cultural significance as, say, the Smithsonian or the Huntington, equating its ads with folk art and its Art-Deco lunch-boxes with Egyptian ceremonial jars.

END_OF_DOCUMENT_TOKEN_TO_BE_REPLACED

Posted in Advertising, Culture, The Corporatocracy