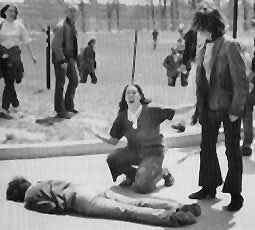 The Associated Press reports today that one of the people injured when the National Guard shot and killed 4 students at Kent State University in 1970 has obtained proof that the Guard was ordered by an officer to fire into the crowd.

A man who was shot in the wrist when National Guard troops killed four Kent State University students during an anti-war demonstration says he has found an audiotape that reveals someone gave a command to fire.

Alan Canfora wants the government to reopen the 37-year-old case because he thinks it will give both the victims and shooters a chance to heal.

“All we want is the truth because we seek healing at Kent State for the student victims, as well as the triggermen who were ordered to fire. And healing can only result from the truth, and that’s all we want.”

Canfora said he recently requested a copy of the nearly 30-minute tape from Yale University, where a government copy has been stored in an archive.

He said that just before the 13-second volley of gunfire, a voice on the tape is heard yelling, “Right here! Get Set! Point! Fire!”

“I was shaking when I first heard it,” Canfora said. “I shed tears.”

Apparently this recording has been in the Yale archives for over 30 years without anyone ever listening to it. Was its existence known at the time of the Guardsmen’s civil trial? Or was someone hiding it to protect them?

You’d have to have lived through that period to know how important it is for those of us who did to know the truth. There’s no way to explain that importance that I can think of right now except to say that it was the moment that we really knew our govt wanted to kill us and was willing to if given the slightest excuse. Over and over they told us that it was all a mistake, that inexperienced NG troops had panicked and acted without orders.

We didn’t believe it and now we know we were right.

But it must also be said that the murders at Kent State so horrified the nation that it never happened again and the tide began to turn against the pro-war forces.

Three of the four students killed that day were bystanders, students on their way to class. If the officer in charge was told by his superiors to use deadly force to put down a demonstration, we have a right to know that.

This entry was posted in History. Bookmark the permalink.