The Gonzales Massacre in 4-Part Harmony 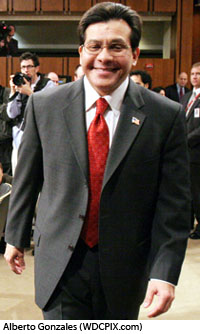 Well, I watched some of the Gonzales hearing yesterday and what I saw was an unholy mess. This guy’s a lawyer? Really? He seemed to have no idea what he was doing there. After all, went his defense, he’s just keeping a seat warm:

He gave his favorite answer – “I don’t know, Senator” – more than 50 times in the morning session alone. Yet, despite insisting he knew nothing that was going on in the agency he’s supposed to be running, he claimed he was too busy in his supervisory role to supervise the firing process.

One came away from his testimony wondering just what the hell he did do? He seems to have delegated virtually every normal duty of the AG to inexperienced underlings and then walked away to play Pong on the computer. Or something. We don’t know what he was doing except whatever it was, it wasn’t his job.