Michelle Has a Talk With Her Mom About Islamofascist Dust-Bunnies 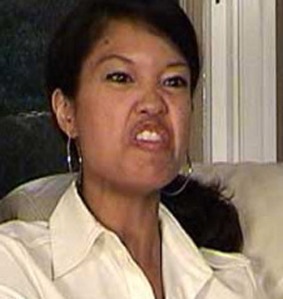 “Help! Mommy! Help! There’s an Islamofascist under my bed!”

“Michelle! What is it? What’s wrong?”

“There’s a monster under my bed, Mommy! Get him away!”

“There’s nothing under your bed, Michelle.”

“Yes, there is! I saw him! He has a beard and he looks foreign. I think we should report him.”

“I’m looking right now, Michelle, and there’s nothing under here.”

“Look in the corner, in the back by the wall. He’s in the shape of a dustball.”

“A dustball! We have to turn him in. He’s a terrorist!”

“That dustball is a terrorist?”

“They can look like anything. They can change their shape and stuff. They’re demons, you know. I saw them on Buffy.”

“Michelle, there weren’t any Islamofascist dust-bunny demons on Buffy. You just had a bad dream. Now turn out the light and go back to sleep.”

“But he’ll murder me if I sleep! He’ll murder all of us in our beds!”

“They do if they’re demons in disguise.”

“It’s not a demon in disguise. It’s just a dustball.”

“How can you be so sure? It could be an Islamofascist who just looks like a dustball.”

“Because Islamofascists don’t exist, Michelle. You made them up.”

“I did not! They bombed Pearl Harbor!”

“That was the Japanese.”

“And we put them in concentration camps where they belonged. See? That’s just my point!”

“We have to round up all the Islamofascist demons disguised as dust-bunnies and make the police throw them in concentration camps so they won’t bomb Pearl Harbor again!”

“They didn’t bomb Pearl Harbor in the first place. What are you talking about, Michelle?”

“Report them to who?”

“I am certainly not going to let you run down to the police station and start yapping about Islamofascist dust-bunnies in the middle of the night.”

“I’m sorry, Mommy, but you’re a traitor to our country. I took an oath and I’m going to have to turn you in.”

“Listen to me very carefully, honey. Your name is Michelle and you’re my daughter – ”

“No, I’m not. You do not know me, you Islamofascist-terrorist-demon-disguised-as-a-dustball Fellow-Traveler. But I am on the lookout for you. You are my enemy. And I am yours.

“Omigod, she’s raving. Michelle! Honey! Snap out of it!”

“I hate to do this, Mommy, but you’re a traitor and even if you are my mother, I have a duty to my country. You’re under arrest.”

“I’m making a citizen’s arrest. I am John Doe and I can do that.”

“Put your hands behind you so I can put these cuffs on you.”

“Michelle! Where’d you get those?”

“On the internets. True American patriots sell them so we can put people like you away.”

“That does it, young lady! No right-wing websites for a week!”

*gasp* “You’re not a Fellow-Traveler! You’re the Islamofascist demon terrorist disguised as a Mommy!”

“I will embrace my local police department’s admonition: ‘If you see something, say something.’

“I am John Doe, and I’m going to say something. I’m turning you in. You’re going over, Mommy.”

“You’re Joan ‘Fruitcake’ Wingnut, and you’re going back to bed. Now give me those handcuffs. Right now.”

“I’m going to tell Homeland Security on you.”

(whispering in the dark) “I am John Doe, and you’ll be sorry. I’m going to sic a patriotic dust-bunny on you.”

This entry was posted in Humor/Satire, RWNM and tagged michelle malkin. Bookmark the permalink.