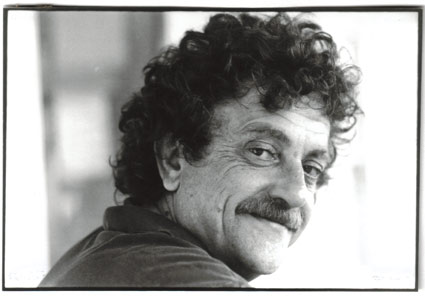 Kurt Vonnegut was one of a very few contemporary writers that I wanted to meet one day. That day will never come now, and I feel as sorry for myself at his passing as I do for his family.

Somebody gave me Player Piano around 1967. I liked it well enough to go looking for his other stuff. I was living in Hartford at the time, and in what I have always considered to be a moment of whimsical serendipity straight out of Vonnegut’s work, I bought Cat’s Cradle at the Mark Twain Bookstore opposite Twain’s Hartford home.

Reading it made my head explode, not in the cognitive-dissonance sense we use that phrase today but in the 60’s, Flower-Power sense of blowing apart the chains on your mind and forcibly releasing it from the constriction of conventional thought.

There are only ever a few books in anyone’s life that have that effect. In my case there were maybe a half-dozen – Thus Spake Zarathustra even though (or perhaps because) almost everything in it is wrong, Arthur Clarke’s Childhood’s End, Kierkegaard’s Either/Or, Dostoevsky’s Crime and Punishment, Mark Twain’s The Adventures of Huckleberry Finn, and Cat’s Cradle.

I know perfectly well that Slaughter-House Five is considered his best novel and maybe it is, but it never did to me what Cradle did. For days (weeks, months, years) I wandered around like an intellectual Zombie. I was studying psychology in Hartford College at the time and Cradle slammed it upside the head, shaking concepts loose that I never knew existed, all of them true.

The karass (and its opposite, the granfalloon), foma, the duffle, the sin-wat, the wampeter – I saw all of them around me, phenomena or characterizations I’d noticed but that had no name and no context in which to put them. I belonged to a karass – had in fact belonged to several of them in my travels, attaching myself to them when I discovered that a path I thought I was walking alone was the same path they had chosen. Our interests tied us together, yet we didn’t go looking, we just seemed to bump into each other in odd ways, doing things we wouldn’t normally do or going places we wouldn’t normally go for reasons we ourselves didn’t understand.

To paraphrase Terry Mann, there are times when cosmic forces crash together in a synergy of co-incidence. For a moment the universe opens and all things are possible. Reading Cat’s Cradle was sort of like that. The 60’s were sort of like that. It was a time when, for a short while anyway, everything that had been taken for granted for 6000 years – racism, inequality, war, strict gender roles, “you can’t beat city Hall” – was all up for grabs.

Most people think the 60’s was about rebellion, and there was an element of that, but underneath what the 60’s were about was a re-examination of unquestioned “truths” that weren’t and of traditions that didn’t make any sense and often acted as oppressors and suppressers of real truth. We stopped acquiescing and refused to accept that racism, sexism, commercialism, and war were eternal, “the way things were”, and could never be changed. That was the “rebellion”. It wasn’t against our parents or the forced conformity of the 50’s. It was about finally saying NO to the insanities in civilization that had built up like cancers over thousands of years.

Kurt Vonnegut was so big a part of that it’s hard to overstate the extent of his influence. We discovered him long before Slaughter-House Five made him famous – and rich. God Bless You, Mr Rosewater, Mother Night, The Sirens of Titan (great book, btw), and Welcome to the Monkey House were all “cult favorites” before Slaughter-House Five was published. We passed them around like joints, hitting on them for inspiration and guidance. Unlike grass, they never failed.

The great irony, of course, is that while we were hitting on him for inspiration, his books were saying we were wasting our time. That civilization would never change in any deep way because we had built what we wanted to build – and we still wanted it. Maybe he was right but maybe not. We succeeded in making some fundamental changes in the way people think about things. Racism, sexism, commercialism, and war are still with us alright, but the first two are weak, possibly dying (though if they are, it’s proving to be a long, slow death) and the second two aren’t fooling anybody any more. So I guess you could say the jury is still out.

That we did as much as we managed to do is in part because of Vonnegut. The Viet Nam War and the Civil Rights Movement may have given us the motivation but it was Vonnegut who supplied the reasons and the understanding of social structures that allowed it to happen. He gave it form. He gave it emotional, intellectual, and psychological clarity. He gave it focus.

He would probably deny that. It’s true just the same. For his contribution, the whole society – maybe the whole planet – owes him.

And so it goes.

This entry was posted in Culture, Novels, Obits. Bookmark the permalink.

One response to “Kurt Vonnegut, Dead at 84”