While the polar ice cap may be melting and the Middle East is getting ready to explode, some people have their eyes on the prize. 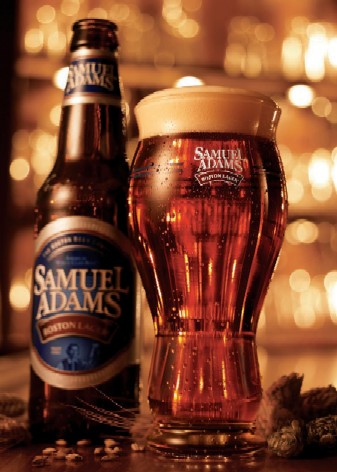 Wine lovers have long used crystal stemware to help experience the exquisite nose of a French merlot or a frisky Australian vin ordinaire, and now the Boston brewer thinks beer connoisseurs have achieved a similar level of discernment when it comes to appreciating state-of-the-art advances in lager delivery-systems.

Sparing no effort, Boston Beer said it recruited “world-renowned sensory experts” to work on the design of a glass that beginning in March, will be sold in packages of four for $30 at http://www.samueladams.com.

One feature of the new glass is a neck-and-lip design that “helps sustain the head of the beer, which enhances the release of signature Noble hop aromas found in Samuel Adams Boston Lager,” the company said.

“It’s a personal passion of mine to develop a beer glass that elevates the craft-beer drinking experience,” Jim Koch, company chairman and founder of the Samuel Adams beer brand, said in a statement. “We wanted to create a glass that offers beer lovers a full sensory experience by fully showcasing Samuel Adams Boston Lager’s complex balance of malt and hop flavors.”

World-renowned sensory experts? You mean there are people who studied and make a living from smelling beer?

I don’t know if you get Sam Adams beers and ales in the rest of the country but they’re very big – very big – in New England. Every bar and restaurant has their pale lager on tap and a minimum of a half-dozen different Sam Adams beers and ales in bottles. These guys are such fanatics that they have “seasonal” beers & ales that they only sell a couple of months out of the year (Oktoberfest Ale in October and November; Winter Lager from December through February, for example) and a variety of designer beers that may only be available for a few weeks and then vanish forever.

It’s good beer, I grant you, and even better if you live in Mass because you get it fresh from the vat. There’s a bar I know in Worcester where they keep four Sam Adams beers on tap, and the darkest of the darks (they don’t call it “:stout” but that’s what it is) is as good as Guinness from the keg. Still, you can take a thing too far, you know?

I fully expect this to be but their first step in designing beer & ale glassware. Pretty soon there’ll be an “ultimate ale glass” and that will be followed by more “ultimates” specially designer for specific beers.

Well, why not? As Bush and Cheney take us down the rathole to ultimate destruction, we might as well have an ultimate beer glass full of the ultimate beer to wash away the pain.

Here’s looking at you, kid.

This entry was posted in Culture. Bookmark the permalink.