To Stop the Coal Plants, Stop the $$$

There’s nothing like hitting the corporatocracy in the pocketbook for making them pay attention or moderate their greed. A coalition of environmentalists is doing just that by going after banks and convincing them not to finance new coal power plants.

A new front in the fight to slow down global warming follows trails of money, not wisps of polluting chemicals, straight to the doorsteps of banks.A coalition of environmental groups, including Boston-based Ceres , is demanding that banks reject loan requests for projects that emit high rates of greenhouse gases, which contribute to global warming. The groups say they have won commitments from more than a dozen banks in the last few weeks to turn away from supporting coal-fired electric plants.

This initiative is coming from the insane proposal of a Texas (naturally) utility called TXU to build 11 – count ’em, eleven – new coal-burning plants which, together, will spew some 78 Billion tons of carbon monoxide a year into the air and all over the central Texas plains. END_OF_DOCUMENT_TOKEN_TO_BE_REPLACED

Posted in Environment, The Corporatocracy

I just discovered that The American Street‘s founder and site-spirit, Kevin Hayden, is going to be leaving. I don’t know why he’s leaving but my assumption is that the financial difficulties and time constraints he was already struggling with last year have reached the breaking point. As he wrote me a year ago just before I had to give up my websites and phoneline because, cheap as they were, I couldn’t afford them any more – and I’m paraphrasing because I lost all my mail files the last time the computer crashed – “Blogging is time and energy consuming. At some point you have to take care of real life.”

The blogosphere has lost a number of important voices in the year I’ve been gone, and it’s still losing them. Michael Berube is hanging it up soon, Chris at fafblog hasn’t written a post since last July, and Jeanne D’Arc’s Body and Soul is now a private blog closed off to the public. These and others were – are – important voices we’re losing, unique and not replaceable. (And yet PowerLine and the Rottweiler coast on. Go figure.) To some extent, they are the ones who helped make the blogosphere what it is and they’ll be sorely missed.

Kevin’s case is a little different. While his individual voice will certainly be missed, he’s leaving behind one of the 2 or 3 best group blogs on the net. The American Street is a near-perfect blend of personalities and points of view, and Kevin’s willingness to give comedy and satire equal space right alongside pithy commentary and thoughtful analysis has created one of the most eclectic and readable group blogs around. For many of us, it’s the first stop of the day. “What are they saying on the Street?” has a much different meaning for us than it does in the non-virtual world. END_OF_DOCUMENT_TOKEN_TO_BE_REPLACED

Posted in The Blogosphere

Jolie Madonna, Children at Your Feet

I’ve been to museums…several times. More than once anyway. I like Rembrant 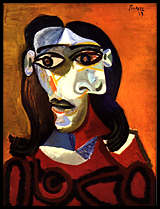 I don’t have any trouble understanding any of them. But sometimes I run across something that’s just…baffling. This is one of them.

(Blessed Art Thou by Kate Kretz)

Can somebody help me out here? Here’s a bit of the artist’s description in case you need help (it didn’t help me).